As per this Future of Firefox announcement, we have a work-in-progress, Metro Firefox preview!

This preview will give you a glimpse of what Firefox on Metro will be like, but it is not meant to be complete. Several incomplete features will exist, which is normal at this point in development.

The preview is meant to be installed on Windows 8 RTM and later. It is built with PGO optimizations turned off, so it will be slightly slower than the default installs. PGO will be turned on at some point in a future update.

The Firefox Metro preview will have updates enabled on its own channel. That means that from here on out, you can keep up to date on what we’re up to with the Metro browser by actually trying it.

Desktop Firefox is responsible for applying the updates for both the Desktop and Metro front ends currently. You may encounter an update error where updates will fail to apply if both of your Desktop and Metro browsers are open at the same time. This will be resolved at some point in a future update.

Some features to look for in the Metro Firefox Preview

This preview will also include the following highlights:

Metro browsers can only be used in Windows 8 if the browser is set as your default. So if you want to keep this preview installed and get updates, you’ll need to keep it as the default. 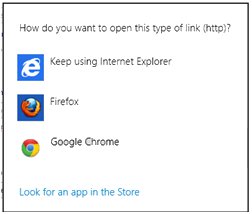 To set the default browser, simply open Desktop Firefox options, go to the advanced -> General tab, and click on the “Make Firefox the default browser” button. This will launch Control Panel, you will need to select the browser from the list and set all defaults.

Things not yet implemented or disabled

Although we have plans for Flash support, the preview currently has it disabled. You can add support for windowless plugins by setting plugin.disable to false in about:config.

As previously mentioned, for the Metro environment only, even in the initial release, we will not have add-ons enabled. We will eventually add support for add-ons through the add-on SDK.

Panning and zooming support is currently disabled. Scrolling with the mouse wheel is broken at the moment as well. Scrolling with the mouse wheel was fixed on the Nightly update the day after the initial preview. You will have to use your keyboard for scrolling, or use touch. Minimum system requirements are the same as Windows 8 except that DirectX 9 is not supported yet.