This Saturday morning I took part in the Perfect PR Backyard Ultra at the beautiful Independence Oaks Park, Clarkston, MI.

As a quick reminder, a backyard ultra is a last man standing event, where everyone does 6.71km / hour (100mi / 24), every hour, until one person remains. Come in late, or choose to not go back out in time, and you’re out.

There was a forecast of rain and thunderstorms for 2 periods on Saturday, with a break in between each period. Tad Machrowicz, an experienced race director explained all the rules including what to do in the event of lightning, a horn would sound 3 times that could be heard anywhere on the course. We started the race on time at 8:00am. 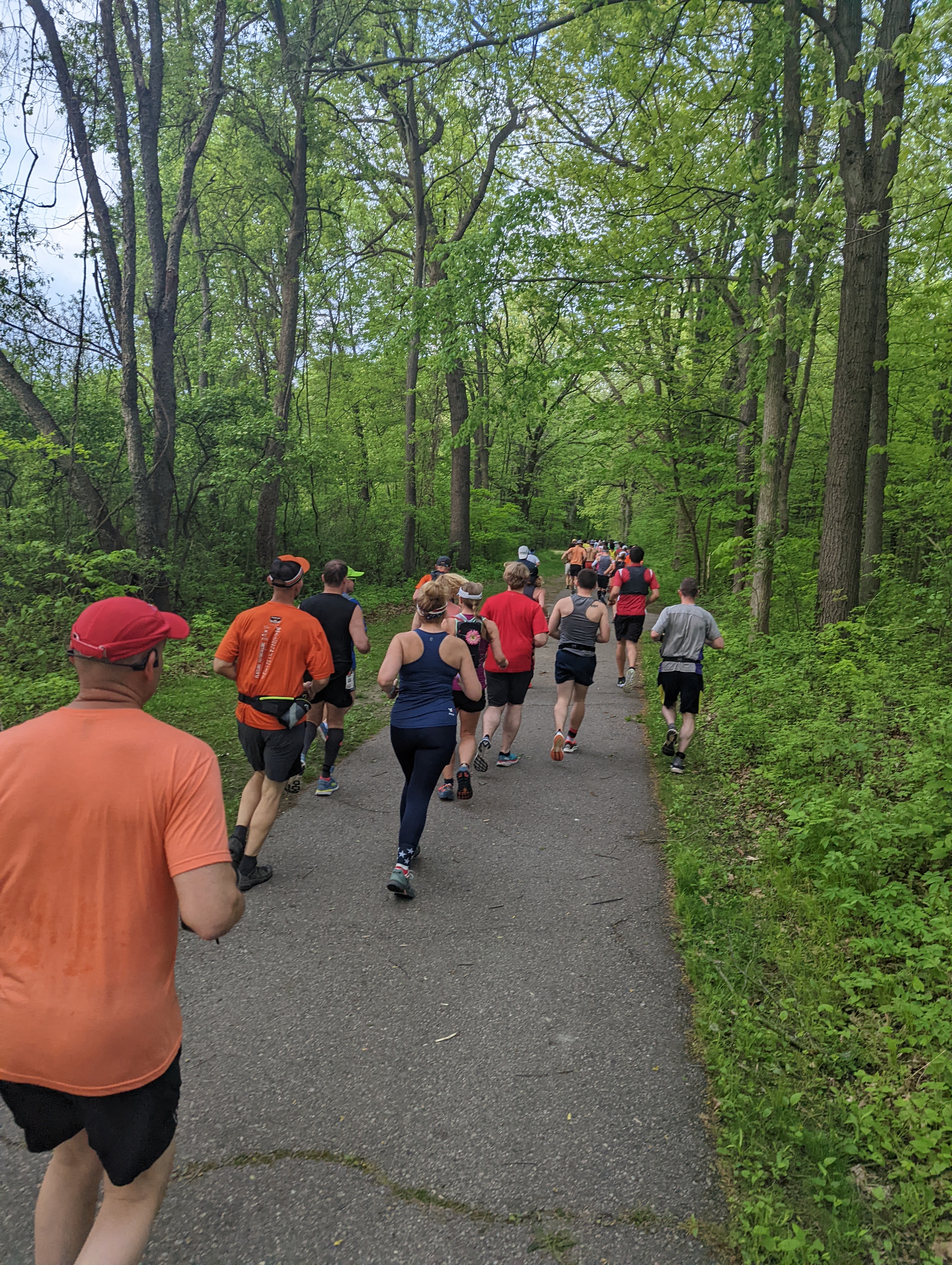 It didn’t take long into the race, during the 2nd loop in fact, that we heard that horn blast 3 times. Everyone returned back to camp, the lap would not count. Rain and hail (how it hails when it’s warm outside I have no idea) pelted us on the flooded trails on the way back.

Later I learned that the 1st loop would not count either. The previous 1.5 (~11km) loops could be considered a warmup. The storm rain had somehow made it into my suitcase of clothes, and they were now all wet. The race continued when no visible lightning had occurred for 30 minutes, which took in total 2 hours to happen. I used the opportunity to eat a lot so my body could focus on digestion and to get my feet powdered and dry.

Upon return, I noticed Gary and Sandra Cantrell (Lazarus Lake of Barkley Marathons fame) came to watch the race, this was a nice surprise. I had met them both before at Little Dog Backyard Ultra at their home in Tennessee on the Big’s Backyard Ultra course. They are celebrities in the ultra running community and so fun to be around. 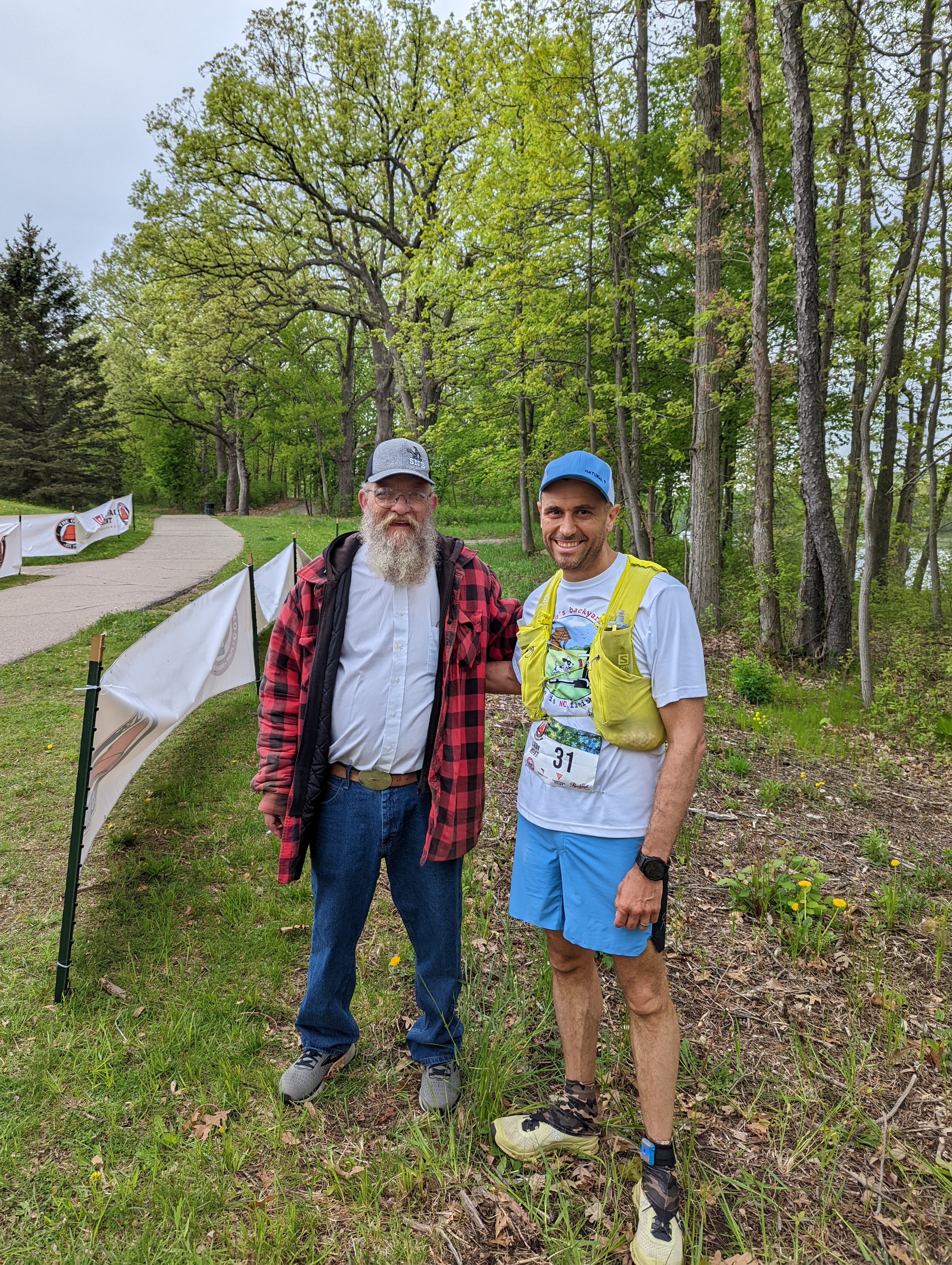 The reboot of Perfect PR Backyard Ultra started at 11:30am.

The first day’s daylight hours were largely me trying as best as I could to keep things slow and easy. It’s a bit boring, and you don’t get to look like you’re strong to others, but conserving that energy pays off later. As Laz says: “Winning a yard during the first day foretells doom”.

Night hours were the hardest loops, and in particular around 3-5am. I was literally starting to fall asleep during the loop. I tried slapping myself in the face, splashing water from my water bottle on my face, but nothing seemed to help. I had not slept much at all the night before because of anxiety. Talking with another contestant on the course helped though.

When daylight started to creep in around 6am, I noticed the difference right away. And within an hour after daylight, I felt like a new person.

Looking at the number of people left in one of these races is always motivating. You start sometimes around 100 people, and that number converges down to 1.

You’re often tempted to quit, how nice would it be to just be done? But if you want it bad enough, then any contestant can keep going.

The night was long and only 6 people made it until morning. The 2nd day was spent learning about other contestants. Eventually around hour 22, when we made it to the final 4, 3 of us paired together. Pairing with others really helps you get your mind off the race. You get lost in conversation and you play off of each other’s strength.

Why give others strength by paring up though? Because we’re all working together to put up big numbers, and the race is not almost over, even if we separate. I think I solidified the trio when we started running together and one guy needed to go to the washroom. We walked until he was done and started running again when he arrived back. He said it was kind of us.

We would have paired with the 4th guy as well (Tyler), but I think he was close to wanting to be done the race, so he bolted out and did several loops hard and fast. This may have been strategic, but we had a lot of loops left in us so we weren’t close to the end, it didn’t affect morale. 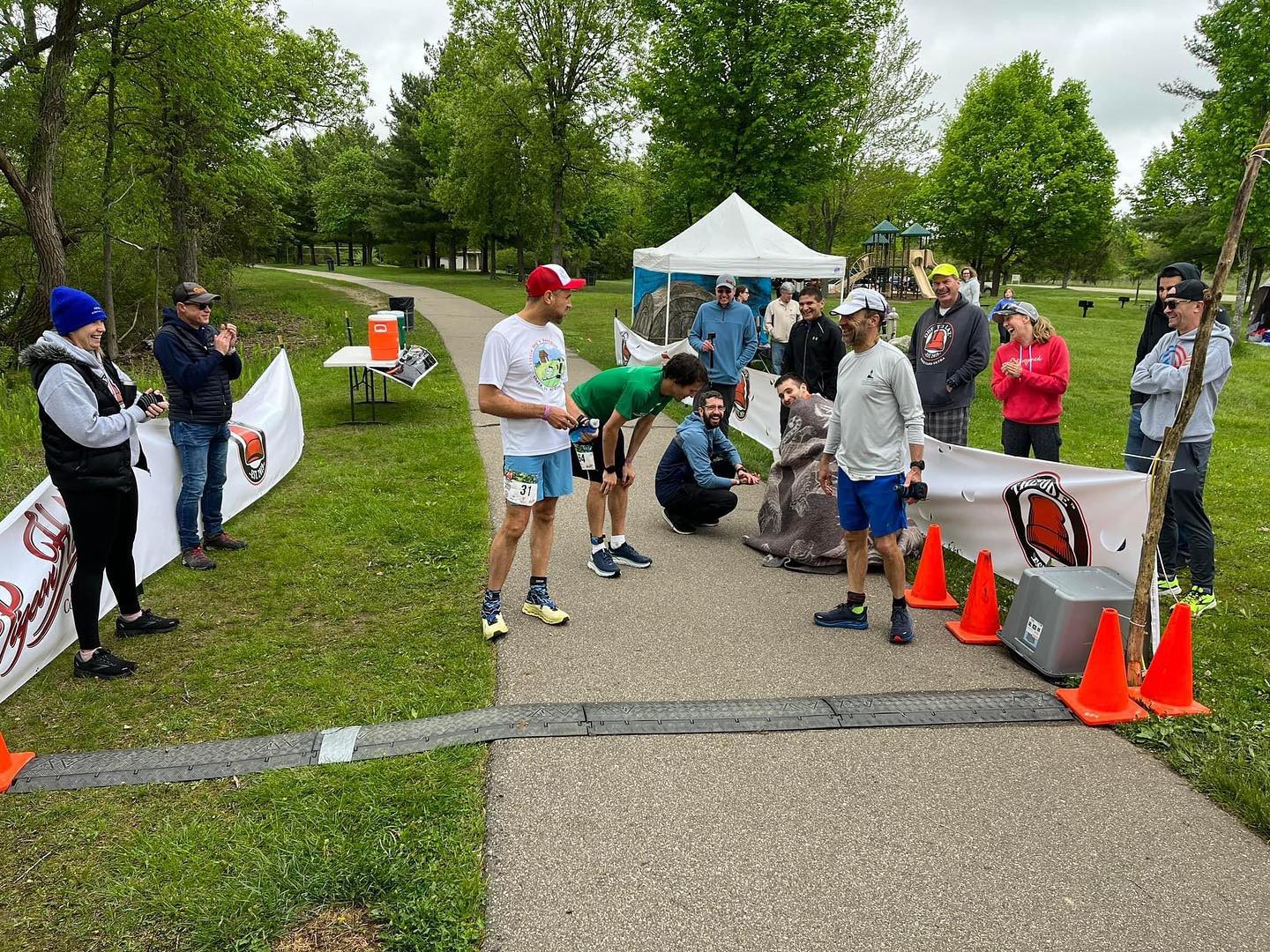 When you talk to others, you learn about their longest distances, problems they may have, and their weaknesses they’ve had in the past. This helps keep you motivated later, but can also work against you if you’re not careful. For example, the assist for this race, Chris Dasbach was a past winner of the Woodstock 100mi race in under 18 hours. A much better athlete when compared to me.

Conversation topics range from being married, having kids, grandkids, past races, pets, occupations, nutrition, recovery, etc. I was even surprised in one conversation where I found a software developer that knew about Brave and my co-founder Brendan, so we geeked out for a loop.

I had won a couple of virtual Backyard Ultras in the past (Including Lone Cactus with 31 yards) but had not yet replicated it at a real event. I thought maybe I couldn’t. After 2 failed attempts at Backyard Ultras last year, I wasn’t sure if I ever would.

I won my first in person backyard ultra here with 219km thanks in part to stubbornness to continue and support and encouragement from others.

I believe I was not very close to my stopping point, although things can turn quickly at a backyard ultra. My mind was willing but my body may not have been willing to go far into the night. The results can be found here: https://my.raceresult.com/202134/#0_B3DC1F 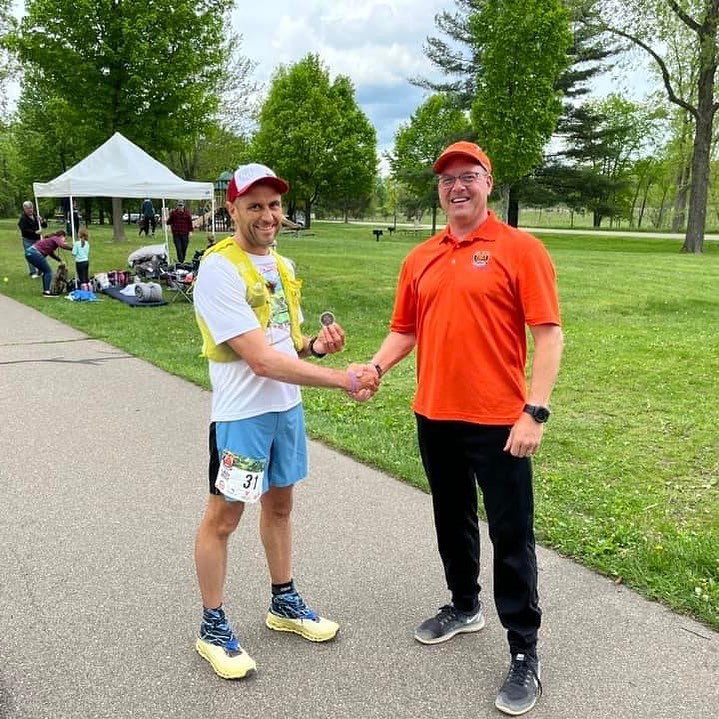 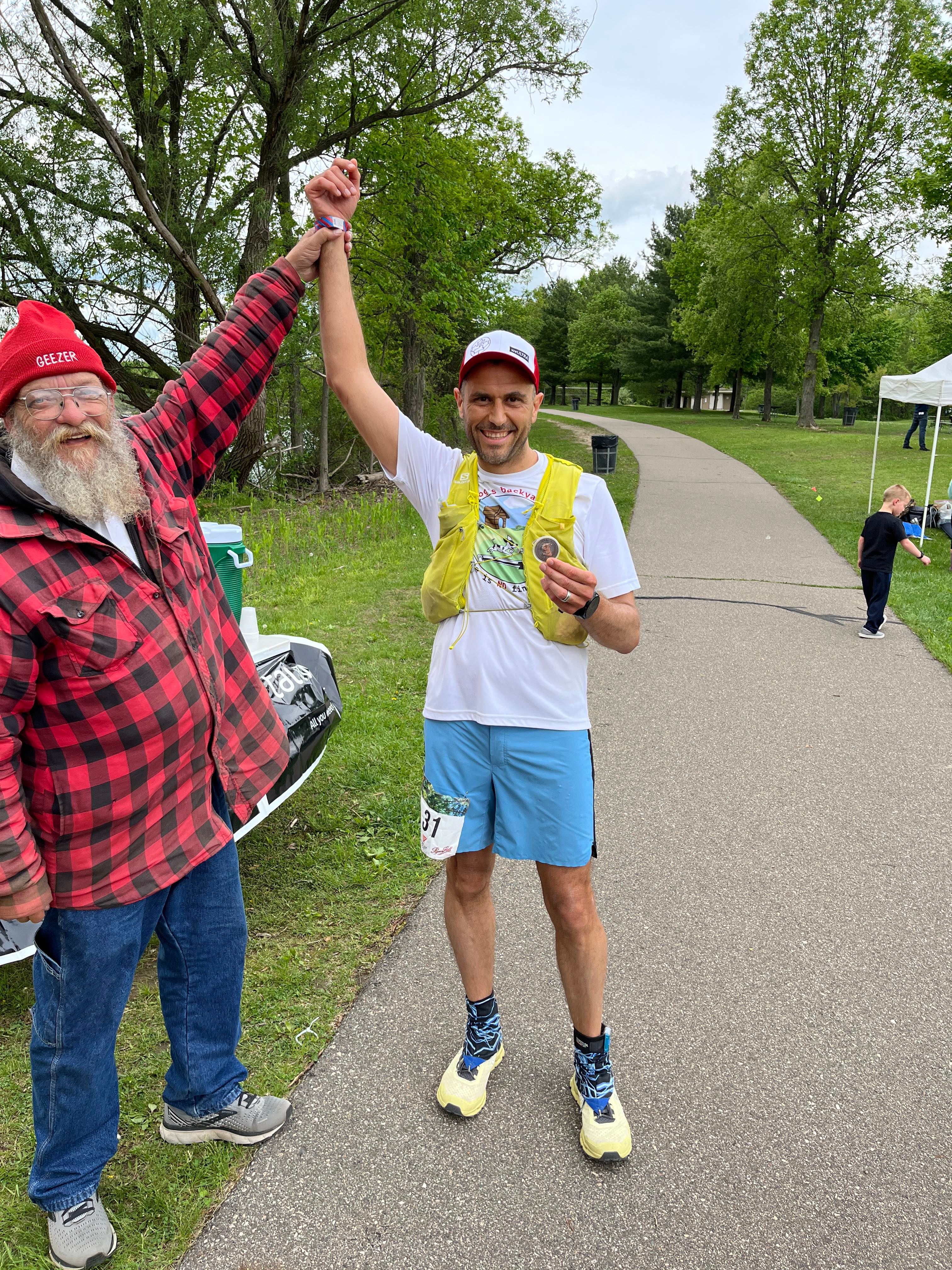 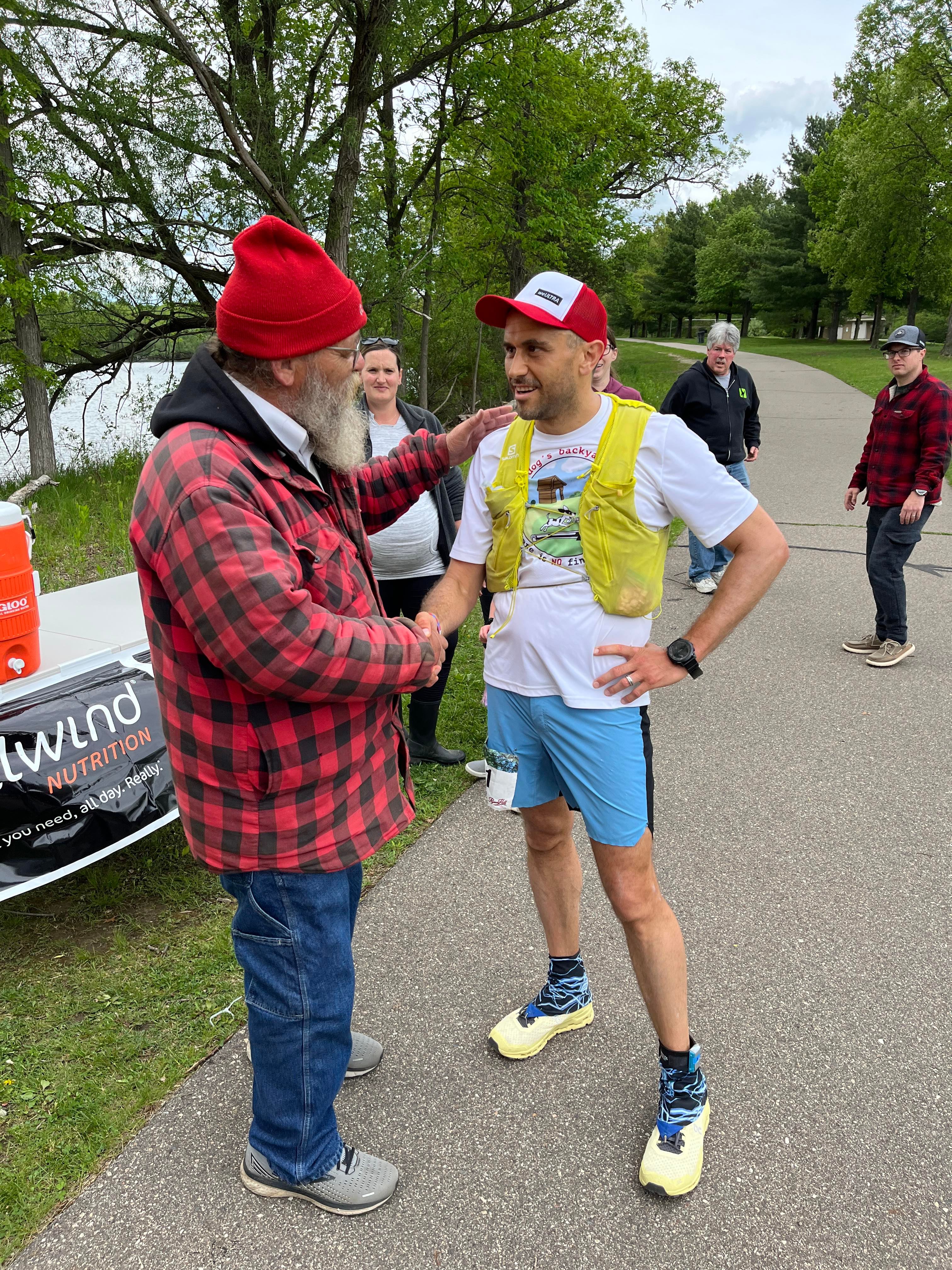 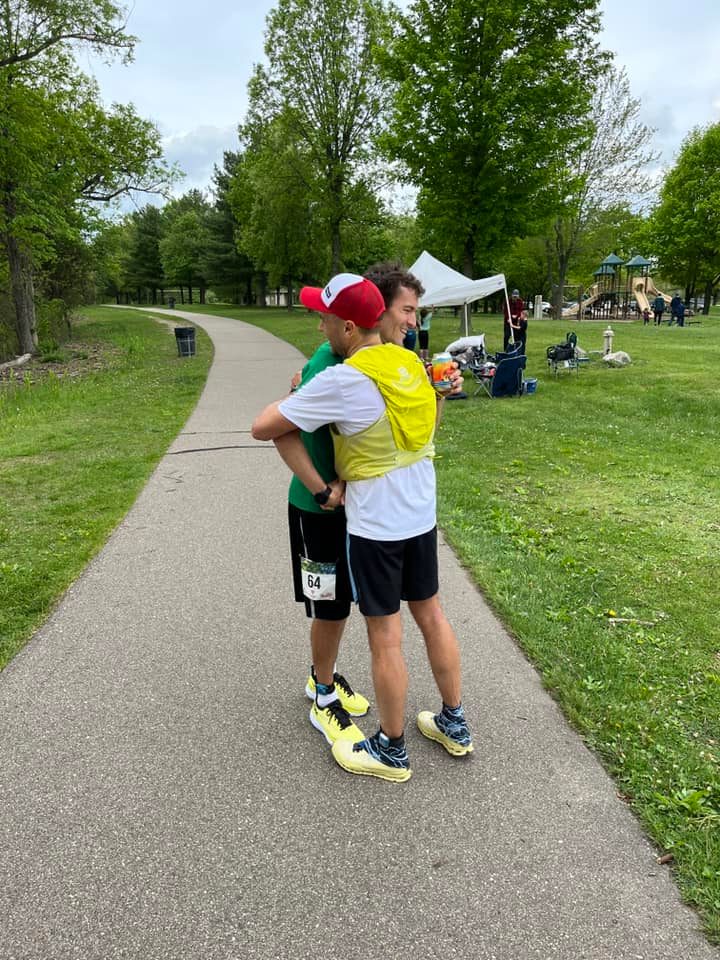 On the final lap I couldn’t see Chris behind me. I figured I was on the last loop. I ran into a guy walking a dog that confirmed it a couple kilometers later. Half way through the victory lap many people including the assist Chris (what a good guy) came to greet me and cheer me on. Since I was the only one registered as a Canadian in the race, they blared Oh Canada! on the speakers. It was hilarious.

Congratulations to everyone that did the race and set personal records. Several people did.

To the assist Chris Dasbach, it was awesome to run with you. I’m in awe of your accomplishments to date.

To the third member of the trio David D’Haene, you looked the strongest of the 3 of us. And being in your mid 50s gives me something to strive for as I get into my 40s.

Special thanks to my partner canopy tent Jason Adams who crushed it. It was a lot of fun meeting you and doing a loop with you. And thank you for getting rid of the snake before the race started under my canopy!

Special thanks to my crew Sergey Zhukovsky who out of the kindness of his heart took 3 days out of his life to help me in the race. I would have definitely DNF’d the race without you. 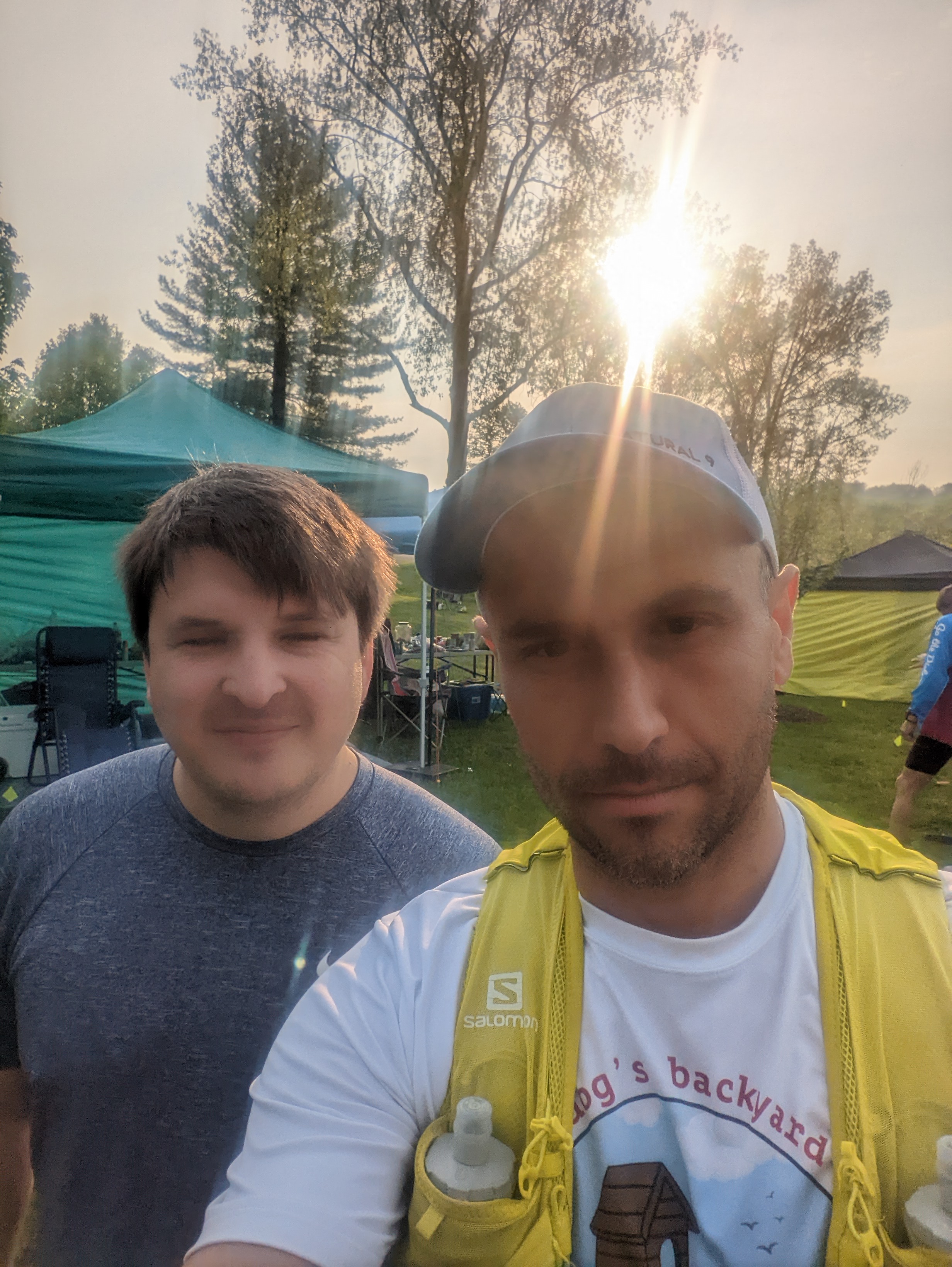 Special thanks to my trainer Matt Masserant who came for a visit on Saturday and Sunday. It’s always a pleasure seeing you in person. 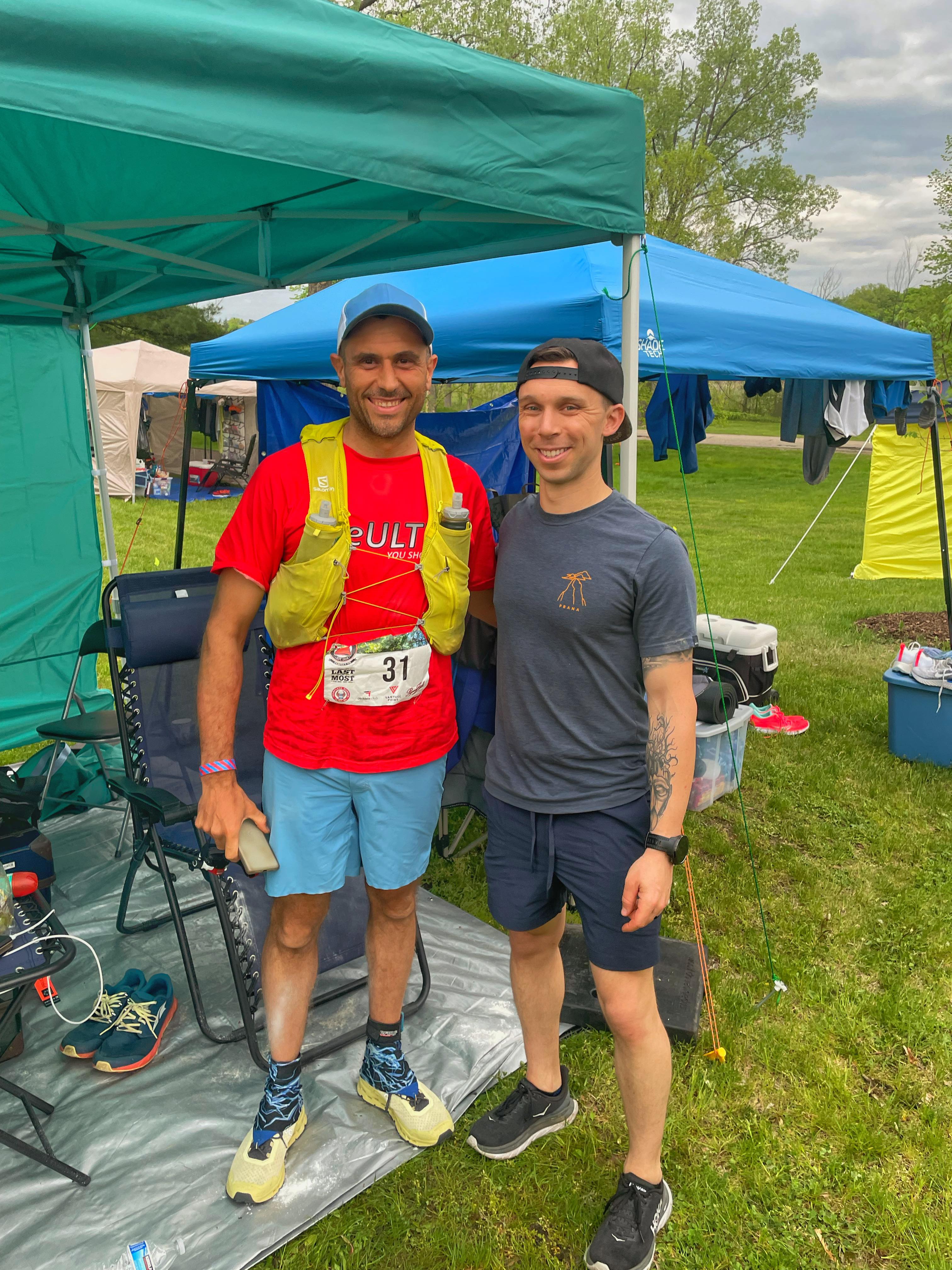 Special thanks to my wife Shannon Bondy for letting me run and train for this several days a week in the morning before work. I did well on this race due to hard training, probably the most training mileage out of anyone there. I don’t think I have much of a natural ability for it. I didn’t let up training since my previous failed races, even throughout the winter. 3-4h runs 5-6 days a week.

Special thanks to Tad and all of the race volunteers. What an amazing event, the Ode family feels like just that, family.

Thanks to my family and friends for encouragement throughout the run.

Thanks to all of the spectators and athletes that stayed around for the whole race. Sarah and Andrew, your energy and fun-level is infectious.

Special thanks to the sponsors of the event:

Some other random notes:

Loop times not including the first 1.5 loops. As they say, slow and steady wins the race. 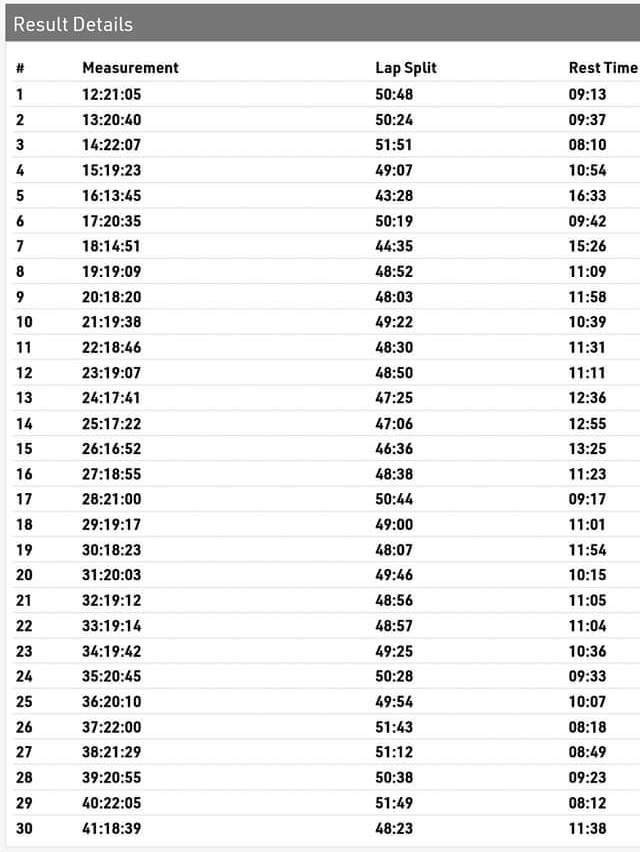