I mined the latest StackOverflow (SO) data dump for all users with twitter accounts, then calculated each user’s top tags based on most votes, and finally sorted the lists by user reputation.

The end result is that you can now easily stay connected with the people in your Stack Exchange community. 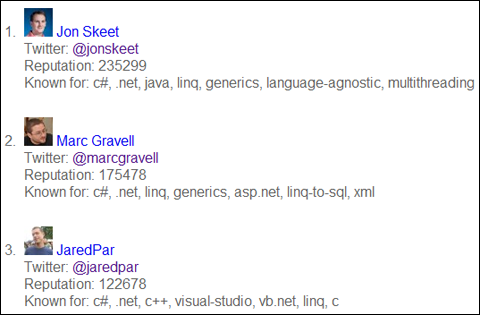 If you’d like to have your account listed in the directories, simply make sure your twitter account is linked somewhere in your profile, and I’ll update these lists again on a future data dump.

I also mined the available Stack Exchange data dumps and extracted those twitter accounts as well.

You can view the lists here: